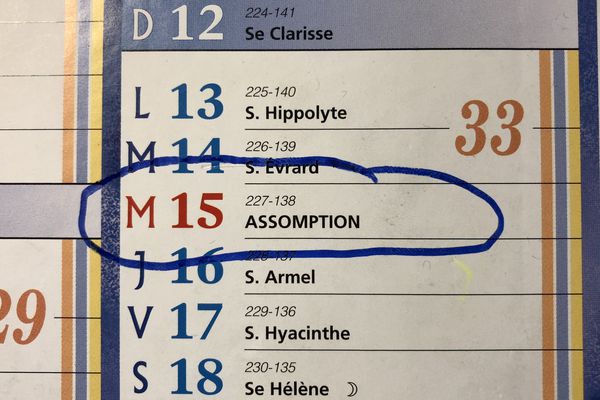 Discover what this event refer to with Chez Nestor! Not to be confused with L’Ascension, the Assumption is another Christian celebration in the French calendar, and so, another occasion to have a public holiday!

The assumption refers to the elevation of Mary into the sky after her death. The story differs according to the different narrators but the Assumption is celebrated for the death, the resurrection, the entry in Heaven, and the coronation of the Virgin Mary. The 1st mention of the assumption can be found in the 6th century. It was rumoured that Mary’s corpse didn’t suffer the consequences of death, her body remains pure. She died surrounded by the apostles, and Jesus brought her body and her spirit in Heaven. Her entry at God’s side, according to pope Pie XII, is an evidence because Mary is victorious of the sin and the death. She hadn’t committed the original mistake.

The assumption is celebrated on August 15 since 1637. Louis XIII wanted to have an heir, so he asked his subjects to make a procession every August 15 in honour of Mary. As his son was born a year after this decision, the procession was considered successful. Louis XIII considered Mary the protector and the patron saint of France. August 15 became a very important day in France. As the dogma of the Immaculate Conception was recognized in the 19th century, religious people and believers all around the world asked that the Assumption was recognized as well. The celebration was officially proclaimed in 1950.
To celebrate this day, a torch’s procession is given every year on the evening or the evening before around churches or chapels. The majority of festivities takes place in Lourdes, where in 1858, a woman named Bernadette claimed to have seen a vision of Mary appear in a cave.  Since that date, Lourdes is the destination of many pilgrims who travel there for the 15th of August every year.  The cave’s spring water is rumoured to have healing powers, as it is the site on which Mary was supposedly spotted.

In France, August 15 is considered as a public holiday, and you can see processions all around the hexagon, usually accompanied by festivities or fireworks… In Paris, they usually bring on a boat on the Seine a silver statue of Mary, kept in Notre-Dame most of the time.

This year, August 15 fall on a Wednesday, so for people who work during this period, you will have a day off during the week to enjoy the sun. If you were thinking that you will miss Dax parties, this public holiday is perfect. The Dax’s Feria takes part from the 11th to the 15th of August. It leaves you the opportunity to wear white and red clothes to enjoy the happiness along streets and to assist to corridas and a race from the Lands.
To enjoy a rock moment, the following week-end suggest a festival on west coast another time. Let’s meet in Brittany, especially in Saint Malo, for a rock festival ! The “Route du Rock”, which takes part from the 16th to the 19th August, is a festival of rock which welcomes many artists. This year, you will meet Phoenix, Etienne Daho, Charlotte Gainsbourg (the daughter of the famous french singer Serge Gainsbourg!) and many other artists.