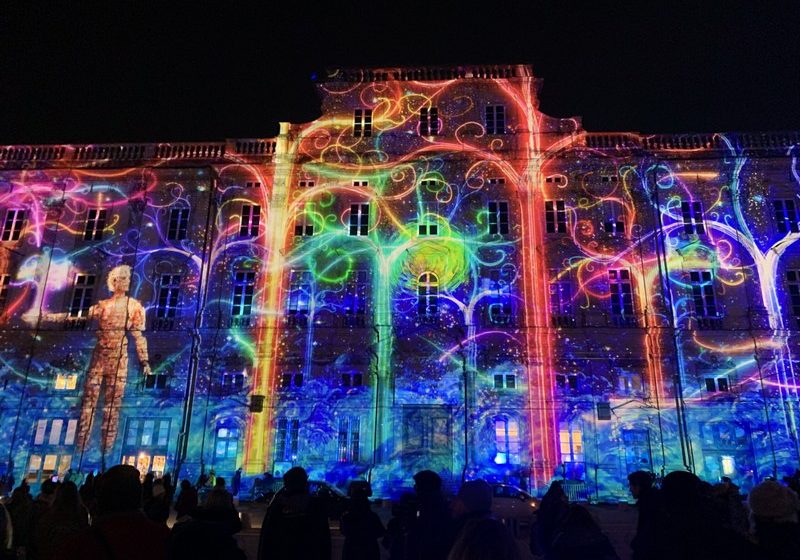 You may have heard the nickname of Lyon, “Ville des Lumières”, which actually comes from the Festival of Lights and partially from the Lumière brothers – but this is another story… Every year, at the beginning of December, the city organizes what we called in French “La Fête des Lumières” which is more impressive year after year. Every year more and more tourists come to Lyon during this festival to enjoy the incredible lightning installations and the activities you can find hidden in the heart of the city. Are you planning to come to Lyon for the festival? Here you can find more details about it this rooted tradition.

The origins of the Lights Festival in Lyon

The origins of this tradition are still open for debate today but people generally agree to say that they are paying tribute to the Virgin Mary.

There are different legends: one saying that Mary saves Lyonfrom the plague epidemic during the Renaissance, another saying that Prussian people were invading France and were trying to take over Lyon and once again, Mary saves the city…

As people were frequently lighting candles for the intercession of Mary (to save a child from disease, a soldier from the war etc.), the city decided in 1852 to honour her properly and to put in a bronze statue of the Virgin, but the weather did not agree. They were unable to install it because of the rain, and finally, on December 8, the sun decided to come out: the statue was inaugurated during the evening and every inhabitant put a candle on their window that burnt until morning.

Ever since, people from Lyon and its surrounding has respected the tradition and lit candles, called “Lumignons” every December 8. The candles are today part of the show and provided directly by the city of Lyon. Take a stroll in the Vieux Lyon and you’ll be amazed about how many candles peek from each window.

Today, this is not the candles on windows that are renowned internationally but the Festival of Lights. Since 1989, the city organized the “fête des Lumières” which consists in setting sound and visual animations on the most beautiful buildings of Lyon, such as l’Hôtel de Ville, the Cathédrale Saint-Jean or the Opera. Each historical monument is worth an incredible installation. They also put a luminous sign in front of the Basilique of Fourvière saying “Merci Marie”. The animations gain more quality and draw in more and more visitors every year: in 2017, there were around 2.5 millions of people to admire the lights of Lyon. Find here more details about last year’s event. The city is already trying to find expositions and themes for their 2018 edition!

If you are in Lyon during the Festival of Lights, be ready to face a lot of people and queue for the metro! If you want to come in the city around December 8, try to plan your trip in advance because, as the event is internationally famous, the tickets and hotel rooms are usually more expensive during this period.

Would you like to discover the City of Lights, experience its cultural events and blossom on the banks of the Saône? With Chez Nestor it’s possible! Find your ideal room, fully furnished, in the heart of Lyon’s city centre, and book it in less than 10 minutes!